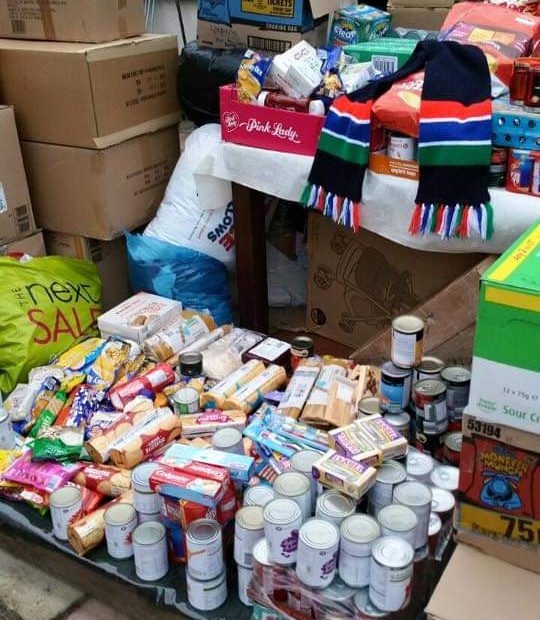 UK Jarra Association which was instituted in August this year aimed at uniting and fostering cooperation” among Jarra natives living within the United Kingdom, had on 18th December 2015 donated large quantities of food and clothing items to Charities within the United Kingdom. Handing over food and clothing to CRIDIC- a Church Drop in Centre which is a charitable organisation that supports homeless and other vulnerable people in the streets of Reading Berkshire, senior executive members of the organisation reiterated their determination to make donations to the needy both here in the UK as they called it “Charity begins at home”

Mr. Mustapha Sanneh one of the executive members described the gesture as a true reflection of the values of Jarrankas cultural heritage which we inherited from our forefathers. Deputising for the association’s Chairman Mr Lamin Manjang, Mr. Sanneh, said he was truly amazed at the overwhelming response from membership of the Association. He said walking the streets of this great country United Kingdom and finding people sleeping rough on the streets while others queue for food handouts from various food banks while others look for places to sleep. He said as patriots we collectively owe them a duty of care hence the need to support them on humanitarian grounds. He said the association therefore feels obliged to give back to the least privileged of the community that provides its members the opportunity to support their families in The Gambia.

Kebba Nfally Darboe, one of the pioneers of the founding of the association is delighted that his people are reviving their inherited communal spirit. The association’s Welfare Officer, noted that as “we are part of this country and we want these people to know the fact that we are very much part of their community as demonstrated through our gestures, particularly in the build up to the festive period of Christmas. We hope the donated items will go a long way to make someone’s Christmas a merry one,” Mr. Darboe extended sincere “gratitude to CIRDIC for their collaboration in making sure that the donated items reach those who need them most.”

The Manager of CIRDIC Mabel Boyd on behalf of the recipients, thanked the people of the organisation for remembering them in their donations. She said they truly appreciate the donation saying the word charity means love and it is therefore vital for us to show this love and care to the people whether we are in our nation or other nations,” Mabel Boyd whose centre feeds over 50 needy people a day expressed her appreciations to the UK Jarra Association and urges other charities to follow their footstep. She promised the items donated would help immensely those in need of it. Interface Gambia was also in attendance filming everything that happened at the venue and probably an airing of the even would be on their TV few days before Christmas.